When I brought Voodoo home we were all struck by how much he looks like Kimfer's dad's horse Rainy... only quite a bit smaller.
In photos where they're not together its not really that noticeable. Both are solid black. Both are fairly nice looking. Both have a slight wave to their manes and tails, long thick manes and tails at that.
Rainy: 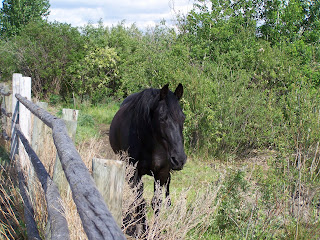 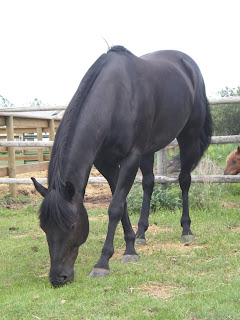 But whenever they're together, wow... its noticeable!! lol
A few weeks ago Kimfer and I went to go for a nice, sunny winter ride. She brought Baron in but his legs were stocked up and she didn't want to risk hurting him. We went to the house where Kimer asked her dad if she could ride Rainy. After a quick 'what the heck?' look and some teasing about riding Ty (who is slightly mental lol) her dad said sure.
Riding along the height difference in the boys was noted. So much so that I said I wanted a picture of the two of them tacked up and side by side. When we got back to the yard Kimfer held Voodoo while I grabbed my camera. 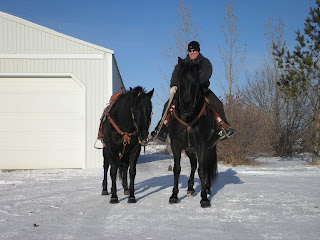 As Kimfer and I were heading out on our ride I told her that I bet some people would be driving by and saying "Oh look. A mommy horse and its child" lol
What's really interesting though is that when we untacked the boys we measured Rainy.
I had measured Voodoo when I bought him, I had been thinking he'd be about 14.3 but he came out dead even at 15hh, I was pretty surprised and remeasured him a few time. lol
We were pretty sure Rainy was going to be well over 16hh, probably about 16.2ish. So we were quite shocked when we got everything as square as we could get it. Rainy is a TWH and was not the most cooperative at standing square... he kept wanting to stand 'parked' lol. But as I was saying, once he was as square as we could get him and the bubble was level it read 16hh.
"What?!?!" you say (as did we)
"But look at those pictures!" you say.
Well yes, it does look like Rainy absolutely towers over my little man. However this makes for a very interesting point, and something important to remember. How a horse is built, and how he holds himself, will effect how tall (or small) he seems. Rainy is built with a higher set neck and naturally carries himself more upright. As a result when he is next to our stock horse bred horses he seems much larger. Voodoo, for example, has a neck that is much lower set and he carries it more low and level (not peanut roller low though!)
Also a hand is "only" 4 inches. That may not seem like a lot but boy howdy does it make a difference! I'm not trying to imply that Rainy and Voodoo are the same size, that full hand makes a difference. I'm just saying that its not as drastic as it may appear.
Here is one last pic of the Men in Black from a slightly different angle, see there's not as much difference as it appeared from the front. 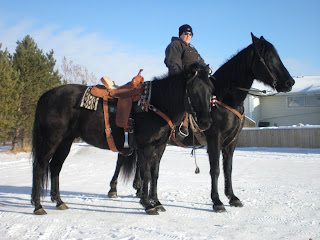