Usually when I refer to my first horse I mean Cessa. However this isn't technically true. My first horse, or rather equine, was a cute little guy I named Moon.
I had begged, pleaded, cried and schemed for years for a horse. Probably since about the time I learned to talk. My parents didn't have horse backgrounds themselves, nor the extra cash to buy a horse. It was explained several times to me that the actual act of buying the horse wasn't the major expense, it was the upkeep and vet bills. (that's where my little schemes came in... really to a 5 year old the backyard in summer and Shredded Wheat in winter is a dandy idea)
The closest I ever got was riding lessons when I turned 15. And unlike many a parents belief that their horse crazy little girl would turn boy crazy as a teen I was hooked on horses more than ever. Although at this time boys did look pretty good too (I would have given them up to have a horse though! lol)
The year Kimfer & I turned 18 a major thing happened... her parents bought an acreage just outside of town! Better still they said I could keep a horse there! Kimfer, as horse crazy as I was, and I were just about to have our dreams come true!!
Kimfer's first horse was a tall, leggy, bay appendix bred Quarter Horse. His name was Rave On Red, we came up with the barn name Rory for him. Kimfer loved him but he just wasn't the horse for her and he was sold within a few years.
My first first horse was a little scruffy guy we picked up at the auction. I named him Moon when we got him home. I also knew from the moment we bid on him that I'd more than likely be reselling him in the future. You see Moon was challenged, vertically challenged. He was probably technically a pony but he looked like a horse, other than his small stature. I'd guess he was probably a POA.
I have a few pictures of him, but my scanner is on the fritz. We always thought he looked kinda like John Lyons Appaloosa stallion Bright Zip so here is a pic of him: 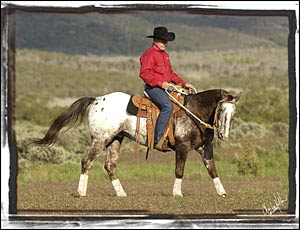 Moon's colouring was more reddish than BZ's is in this pic.

Now you probably wonder why the heck I would have got him knowing that he'd never be big enough for me to keep. Well the auction was where my dad finally said they'd buy me a horse and dang it I was coming home with a horse!
We had walked the pens before hand and I had noted anything I was interested in on the program. Unfortunately for me it was a good night for the sellers. Everything I had liked was selling too high. The auction was almost over and then came in this cute little two year old stud colt. Yup, Moon.
He was listed as green broke to drive and I remembered his bright attitude from the pens. I knew there was a pretty good chance that he wouldn't end up big enough for me but I also knew that I'd be happier with a project horse than with nothing.
So we bid. And we won. And I brought Moon home for about a year and resold him. So technically he's my first horse. But I usually consider Cessa my first because she was The One that came home for keeps.

Email ThisBlogThis!Share to TwitterShare to FacebookShare to Pinterest
Labels: Moon