I was in the office helping with envelopes while our Chair person, Ash, and another director, Jewls, were getting the short go figured out. Short go was based on the average of your two running times so things got moved around a little bit but not too much. We were taking back 15 in each D, Ash was reading out the names and Jewls was writing them out.  When Ash got to the 13th spot in 3D she giggled and said "Wow, I can't believe this person made it" in a joking voice.  Jewls and I looked at each other and said "Who?" at the same time.  With a sly grin she looked at me and said "You're back on Lefta!"
Shocked to say the least, I asked if she was sure, and yes it was correct.  The 14th spot was read out and then she burst out laughing when she got to the 15th and final spot... I had made it back on Frosty as well! :o
I'll admit my first reaction was "Oh crap!"  Between not having a lot of time to get both horses ready and the fact that he had been humpy earlier I wasn't too sure what to think.  I quickly texted Janelle and she called right away for a pep talk.  She said he had felt great when she worked on him and she was confident he would run and be fine.  One of the other board members hadn't made it back and I really like how she handles a horse so I asked if she'd warm up one of mine and she said yes.  Lefta was first up so CB warmed up Frosty for me.
Lefta ran clean and pretty, but not fast.  The poor girl was t.i.r.e.d. 4 runs in two days were enough!
I cooled her out and put her up in her stall then went to the warm up ring.  CB smiled and said "He's really nice!  Like, I want him nice".  I told her she'd have to get in line behind MJ's daughter who is in loooove with him lol
As soon as I swung on I felt better, he just felt good.  We walked and loped a few circles to confirm it and he finally felt RIGHT for the first time all week.
We went to the arena to wait for our turn... then we were going in for our run!  I was a bit hesitant to push him to first, so I let him cruise in (oh what a mistake that would end up being!)  He turned nice but hadn't gotten much speed going in and was a bit wide (my fault).  Second was good, pics below: 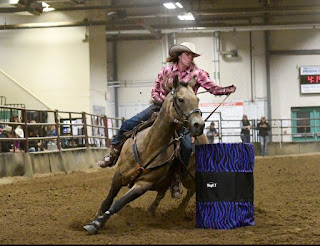 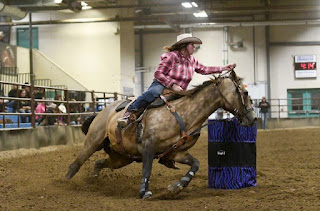 He rocked third and I rode and kicked all the way home* I could hear some cheering from my friends and new we had had a good run :D
*not stopping riding/kicking before the timer has been a mental issue I've been working on.  Riding harder has been something I've worked on this year too, with support/verbal butt kicking from my friends*
I'll admit, I was almost in tears once I had him stopped in the holding pen.  He had felt so good, it was a really nice run and it just felt so damn good to have him feeling right again, I was a bit emotional.  One of my friends ran over and was super excited, congratulating me on my run and then said something that blew me away... She was pretty sure I was sitting in the top couple spots in 3D!  I knew it was a good run but I didn't think it was that good... not for the team that had barely made it back to the short go! :o   Now there was nothing to do but wait.
Once it was all said and done, yes Lefta finished pretty much at the bottom (if not THE bottom) and Frosty, well my golden boy finished 2nd in the 3D.  We missed the buckle by 0.026!!  Not giving him that push to first, and not keeping it a bit tighter cost us the buckle!
Instead he got a swanky BOT sheet with SBRA 25th Anniversary embroidered on it.  Not mad at all, love those BOT sheets! 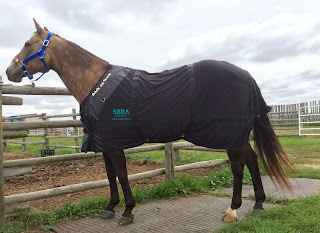 All in all I am pretty pleased, making the short go was on my goals list this year.  I've never made a short go and I got back with both horses and finished in the prizes with one.  :D  I'm really looking forward to next year... already planning a goal list and game plan!
at October 19, 2016