Intro to an Ed clinic :)

First I have to say, for those of you that haven't had the pleasure of meeting Ed... never ever never say "Ed says" because chances are if you say to him "You said..." he'll say "No.  What *I* said was..." and there will be a bit of a difference, sometimes the teeniest sometimes a lot, between what he said and what you interpret.  That's my disclaimer ;)
So here is what *I* understood and took away from the clinic:


LEARN YOUR HORSE
Every horse is different and responds to things differently.  It's up to you to know what helps your horse work their best and keeps them soundest and happiest.

Rate.  Unlike how rate is normally explained ("slowing down your horse so it can turn the barrel") this is Ed's explanation of rate: a shortening of the stride, then shaping and guiding into your turn.
Part of what I love about Ed's method is just that, shaping and guiding.  When you ride Ed's way there is NO "yanking" or "pulling" your horse into and through a turn.

Riding.  The athletic position to ride in and get the most from your horse is up and over the front two ribs, this is also the strongest part of your horse's back.
At this point he showed us two photos of working cow horse trainers.  Sorry I didn't get the names, but I recognized one as this cover with Boyd Rice on it. 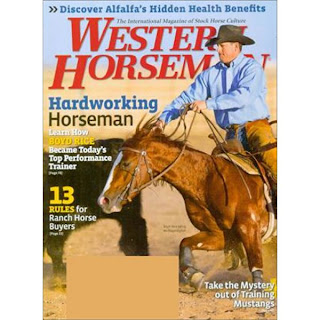 The barrel.  There are two good ways to approach your first barrel.
One is to look at the barrel.  The drawback to this is it may lead you to rub, or worse, to knock the barrel.
The second, and better, way is to look at the ground where you want to travel around that barrel.
Now that may sound funny.  Seems like a simple thing right?  But I've heard of people suggesting other places, such as a point on the fence/wall to look at and 'ride to'.
This leads to a comment about the "Look!  Look!" that you hear so often yelled at barrel racings.  It's usually your friends and well meaning fellow competitors, trying to remind you to look up at your next barrel not down at the one you're turning.  Two problems, 1) you shouldn't be looking at your barrel as you turn it (umm, yeah I am guilty of that at times lol) 2) you shouldn't be looking up at your next barrel until you're finished turning the one you're at.  Both can cause you to rub or knock the barrel you're turning.

There's three good ways for your horse to turn the barrel.  The best way, both in terms of efficiency and for your horse's well being, is in "4 wheel drive", or the other metaphor that Ed kept using "like a slinking cheetah on the hunt".  The second best is a rollback style turn where the horse sets and turns on a hind leg, its a bit more hard on your horse physically though.  And third, a pivot on the front leg style turn... this is much harder physically on your horse. 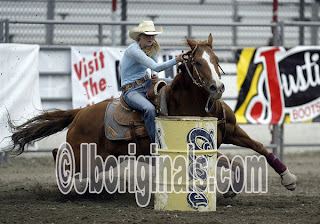 This photo of Lindsay Sears and Martha is a pretty good example of a horse in 4WD, pulling with those front legs and pushing from behind, the whole body working as one.

This photo and the one below (again Sears & Martha) are good examples of the next thing I want to talk about, hands.
(actually that 1st photo, of Boyd, is a very good example of the hands and the body up over the first two ribs)
Whether you're turning your barrel, running into the arena, running between barrels or scooting home, Ed wants your hands very forward.
It was something I noticed at the first clinic of his that I went to (Oct 2010)  I was halfway through the order and observed that he was getting all the girls to ride with their hands much more forward than what you normally see.  In fact he put an elastic in the mane as a visual reminder of where he wanted your hands, that elastic was about halfway up your horse's neck.  So when I went to warm up I practiced keeping my hands there, and I was the first person that day to NOT get an elastic (and there were only a couple others) 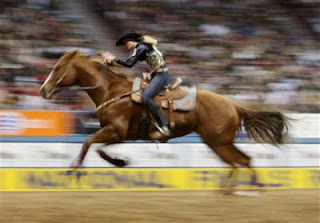 Look again at that first photo of Sears.  Her hand is way up Martha's neck, lifting up a bit to help shape and guide but not pulling out to yank her into the turn and around the barrel.  Then in second photo, she's running on a straight but hasn't thrown her reins away.  They are up the neck and forward, moving in time and helping energize that great mare to stretch out and run.
With just a small movement in any direction you can get so much more from your horse!  Shorten stride, lengthen stride, smoother turn with more shape and guide (no yanking around the barrel!), cleaner steps backing, etc.

That hand position, along with timing & feel (you hear timing & feel a lot as well as shape & guide lol) and that forward body position totally change the results you can get with your horse.  And to me, that is the essence of an Ed clinic (as far as the riding)  Now of course there are exercises and drills but they all seem to come back to that.
Sounds easy right?  Wrong!  Ed has so much knowledge & experience, as well as being very competitive, driven and having a keen eye, that when you think you've got it and are doing well he can pick out something (even the teeniest thing) and point out what you are in fact doing wrong and make you work on it.  And he will work within your level of experience.

There were girls at our clinic that ranged from rookie riders to experienced rodeo competitors and he gave them all something to work on within their range.
For example, girls who didn't have much riding experience... He'd help them work on their hands and timing to help them get a better turn but he wouldn't overwhelm them with other things (such as the hindquarters drifting).
Now some may think that's not good, that he should work on them getting 'perfect'.  But if he did that they'd also feel they weren't getting anything out of the clinic, they might feel embarrassed or discouraged so instead he gives them workable & usable building blocks and as they become more advanced he'll pick on them a bit more ;)  Or if they don't come to another of his clinics there's hope that they'll just become better riders with time & experience.
And he never let on that you were or were not "top of the class" as far as skill, everyone was treated equal IMO.

This is already getting long and this seems like a good place to stop for now.  More to come!

**photos were found via Google images.  Boyd Rice cover of Western Horseman magazine, 1st photo of Lindsay Sears credited to JB Originals, 2nd photo of Sears I'm not sure who the credit goes to (but I think it's Mike Copeman, sorry if I'm wrong!)**