Today is a very special day. Today is the day that our nation sets aside to pay tribute to, to show respect and to honour those who fought on our behalf. Today is Remembrance Day.
For the last week or so these poppy pins have been seen on many a lapel, shirt, jacket or hat: 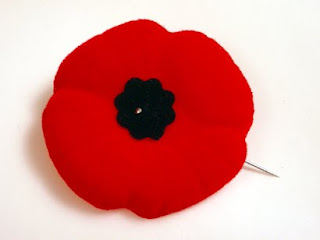 Whether or not you agree with war you should respect and honour those willing to fight on your behalf. They are the ones that guarantee your rights and freedoms. It is because of them that you are allowed to share your opinions out loud and for the world to hear.

Remembrance Day ceremonies will be held across the country and the phrases "Never Forget" and "Lest We Forget" will be said many a time. I believe Remembrance Day is important but I also believe that we should hold this feeling in our hearts not just on this one day but throughout the year.

And so to the following I dedicate my thoughts today:

the 619,636 men and women who served in the Canadian forces in World War I

*this from a nation of only 8 million at the time*

the more than 45,000 of them that gave their lives for our peace and freedom

to those soldiers who have put their lives at risk for us, and others, in many countries such as Cypress, Korea, and the middle East.

and to the many more injured and those currently serving.

God Bless you and Thank you.

The service and burial were private but the procession allowed members of the public to pay there respect. It was just by chance that my husband and I passed the funeral procession travelling the opposite direction. It moved me to see people lined up on a freeway overpass and on the sides of the road waving our flag.

Lt. Boyes widow has shared with the media her husband's concern that Canada is not supporting its troops.

Recently he told her he was worried that some Canadians are undermining the military's efforts in the ravaged country.
"Justin and I believe in the mission in Afghanistan," she has said.
"One of the things that frustrated him was the lack of support from the Canadian citizens he lived to protect. He said recently, 'we're not losing this war, but if we do, it's because we lost it at home first.'

I may be only one voice but I would like to say I support our military and thank them for what they do. I will honour all of our heroes in my heart, but today I will especially honour the 133 we have lost in Afghanistan.

*these images are not my own, they were found with Google Images*