I'm not. I used to think its because I'm "heavy" but I know a lot of large people that are photogenic. Then there are the non-photogenic slim people. So there goes my excuse! :p
A lot of people don't like to have their picture taken, Kimfer is a great example. I have plenty of pics with Kimfer's hand waved at the camera blocking her face. lol
A few people have asked to see pics from barrel racing and I've decided to (as Kimfer likes to say) suck it up Buttercup and go ahead and post a few. My scanner isn't working for some reason though so I got my mom to scan them and e-mail them to me (Thanks Mom!) Here are the *shudder* results.

These first two are from S.B.R.A. Provincial Finals in 2007 (in Regina) My last year running Cessa. Hey the poor girl deserved to retire (even if she didn't want to) she was 26 then!
Note in the first pic I lost my outside stirrup. I hate when I do that! Also please excuse the funny faces, I had to smooch to her after she rates and starts to turn. (made for some interesting pics) 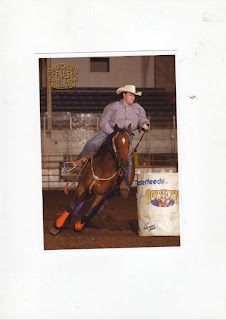 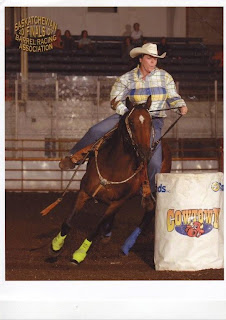 This is Applejack's first time somewhere besides a regular jackpot. Once again its S.B.R.A. Prov. Finals, 2008 this time (again in Regina) This was the second day and he was a bit better. The first day he stopped and thought "what the h..." when he saw the spectators and announcers, right at 1st barrel! It may not seem like it but I was pretty sure we were going to hit this barrel or just squeak past, that would be the reason for the "oh crap" look on my face. I was very focused on trying to get him past the barrel. 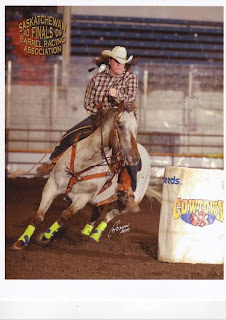 Yup, once again S.B.R.A. Prov. Finals, this past season's - 2009 (not Regina though, this was Moose Jaw). I have to say I actually kinda like this picture (wow! lol) Maybe because I'm not looking down. I do that a lot when running the pattern and have to really work on that for next season! Note once again no outside stirrup! I cowgirl'd up and kicked hard all the way to 3rd (this is 2nd barrel) and all the way home. The whole time praying that I'd be able to stop safely. What do ya know, 1 stride before I asked him to stop my foot slid back into that stirrup! :o 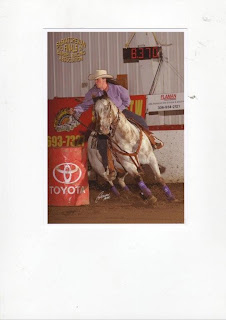