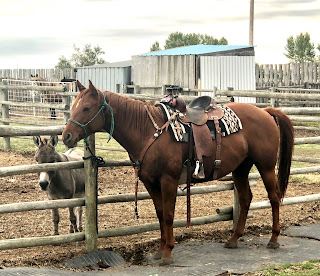 Meet Paige (Thats Superduper Pal) 6 year old AQHA mare
No, I didn't buy another horse lol Actually I've sold one but that's another post! Paige belongs to one of my boarders, B. 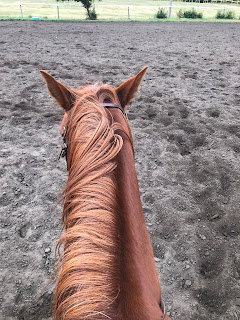 This has been my view lately.  I'm not a trainer but I agreed to put some rides on Paige to help smooth out her barrel pattern.

Again, I'm not a trainer! lol However B is a fairly new rider and even newer to barrel racing.  Paige was halter broke when she got her and she sent her to be started by a professional trainer then B started patterning her on barrels herself.

They had some green barrel horse/green rider moments last year but that was to be expected.  This year Paige was starting to realize what the game is and seemed frustrated at times.  B realized that maybe getting someone with a bit more experience to help would be a good idea but she didn't want to not have a horse to ride and also with being student she didn't have a big budget to send her to a pro.

She asked me if I would help and I'll be honest, at first I wanted to say no.  I think I've mentioned it, but a few years ago I started having an issue with fear and riding strange horses.
Instead I said yes.  I know Paige, she lives here.  Yes I've seen some naughty behavior but nothing really bad and nothing where it seemed like she was purposely trying to be bad.

I started working with Paige with a getting acquainted ride, I warmed her up walk, trot, lope, and I was starting to regret agreeing to ride her... her lope wasn't great and omg her trot was so rough.  But we kept going and moved on to working some basic barrel drills.  She was definitely not smooth and fluid on the pattern, and she really seemed to want to drop her shoulder turning (particularly left) so I was working on getting her to keep her shoulder up and move over nicely for the turn, she seemed to be getting it and then it happened - she picked her shoulder up and felt like she was going to make that nice move and then instead dropped in hard and took us right into the barrel.  At a solid lope. Hard.  (thank goodness for plastic barrels, although it still banged me up)

We kept working and for a bit it was not pretty but we ended that ride on a good note. Thank goodness.

When we hit the barrel just under my knee took the impact.  Enough to break skin and my leg was swollen by the time I went inside, I ended up bruising from the knee all the way down to the top of my foot and around my ankle.  It hurt a lot to walk or ride but we kept working, although the barrels came down and we used cones for a few rides ;)

As much as I like and respect Ed Wright, he wasn't much for doing drills and in a case like this drills were so helpful in getting Paige on the right track.  In particular I really liked one I call the four corners drill.  It really helped her come out of a turn and drive straight to the next barrel (or in our case for awhile, cone lol), and then to pick up and move over to turn it.
Its not all drills though; time warming up and cooling down or "just riding in the arena" were all done with focus on trying to get her to use her body correctly - to keep upright and not lean, to keep that impulsion and drive from behind, to soften while being ridden and while stopping.  And her stop! Her stop has gotten so much better!  In just riding - I barely have to touch the rein most of the time now.  And her stop after a run is much nicer to, run to the gate/fence and stop straight instead of turning off - which is a personal preference for each rider, I wanted Paige stopping square because she was inconsistent with how and where she'd turn and circle after a run. 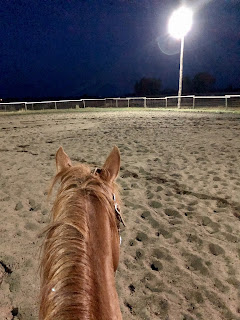 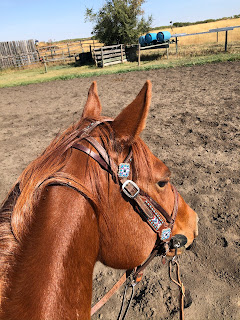 I'm pretty happy to say that with ten rides I've seen a big improvement.  B rode Paige in a gymkhana (all events except barrels lol) and a few fellow barrel racers that knew I've been putting in some rides said they could see the change.  B says she can feel the changes even just riding out, but particularly in how she handled in the gymkhana games. I put a few more rides on after the gymkhana and Paige just got better and better.
B knows it will take some work on her part too, she's going to have to adjust some of the things she does while riding and we'll work on that together :)
at September 29, 2020