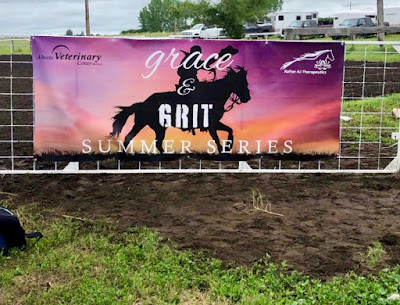 This past Saturday we finally had our first "real" (aka not virtual) barrel race.  A group of local barrel racers had been planning a series since fall, Grace & Grit.  They had worked hard to put together a fun series with some good prizes and then covid19 derailed everything.
Now that Sask is finally opening up enough to have some equine events they were able to go ahead.  And what a great day in barrel racer land it was!  Lots of smiles, some really nice runs, and beautiful weather.
The weather itself is almost it's own story lol  The G&G committee had rented Rafter K for the event, and early in the morning I woke up and heard rain.  Now after several drought years in a row I'm not going to curse rain, but why that morning!? ;) I started the morning in sweats and a bunnyhug to do chores and move horses because the mosquitos were SO BAD.  But it was so humid that when I went into the barn to sit down and check messages my glasses fogged over :o  I changed into a tank top and shorts, and was eaten alive.  A bit later when the day was really starting I put on jeans and a t-shirt, and felt damp and hot the rest of the day.
The committee pushed the start time back a few hours and we all watched the forecast.  So far we had somewhere between half an inch and an inch of rain, and for 1pm on it was saying 70-80% chance of more.  Then sometime between 10.30 and 11 the forecast changed to 20-30%!  Not long after that things were under way... banners and signs being put up, trailers pulling in, horses being tacked and warmed up.  That bit of rain turned into a blessing, the ground was pretty much perfect!
I had only entered Lefta because Frosty was a bit sore due to the heat causing his IR to flare up a bit (he's ok, it's something we manage every summer)  We were deep in the draw, almost at the end so I saddled Lefta and tied her by the barn but took my time waiting to get on.  In the meantime I took a turn working the gate, one of the best spots to watch runs from ;)
When it was time to warm up I popped into my tack room and changed my t-shirt for a competition shirt.  With how muggy it was I was not looking forward to long sleeves!  I know the MSport6 shirts are great in heat, but I haven't really had the occasion to wear one in humid/muggy conditions.  Well I was sure surprised when I put it on and felt not only cooler but drier!  Dang I should have been wearing that all day!
We warmed up with some trotting and loping in the barrel patch.  Lefta was working nicely but starting to get a bit hot mentally so I took her over to the arena and we just walked a big loopy path through the parking area in the pasture.  As long as she was moving she was relaxed. I used the time while the five before my set were running to thoroughly visualize our run. Then just as they were finishing the drag before our set of five I brought her closer to the gate.  Again just walking around, staying out of the way of the girls going in ahead of us.  Then it was our turn!  She was a bit hot going to the gate; I reminded myself to breath and stay relaxed, keep my hand forward and talk softly to her.  A few little changes of direction but she always came back around to face the gate and closer each time, and then we  were in and off to first.
I was really happy with first, she almost always inhales that barrel and she did so again.  Second I remembered to help her finish a bit better than I usually do and we didn't bow out a bunch to third. And third!  It was the best third barrel we've had in ages.  She went in at a great spot in our pocket, wrapped that sucker and came out neat and tight on the other side.  For quite awhile now we've either rainbow'd the whole dang turn or gone in nice but not finished it well and come out really wide.  This was almost perfect!
I came out of the arena patting Lefta and a big smile on my face.  I had no idea how my time would hold up or what my run looked like but it felt great!  Neat, tight turns and an ok time on the clock.

WELL
For starters I did see a video of my run and it looked as good as it felt.  It was pretty much what I'd visualized :)

(run was not added to this post because it's low quality and jumpy)
And it turns out I'd misheard my time.  It was faster than I'd thought by about a half second!  So instead of landing in the money in the 3D like I thought we might, we finished up 8th in the 2D!!  Don't get me wrong, money would have been nice but I was so happy to have ended up in the 2D with some pretty tough competition!  And I do have points in the series now lol
Now, to keep legging up Lefta and try to improve that time!  Unlike some people I have been working through covid, and my schedule has been a tough one to deal with getting anything done.  But for the remainder of the summer I'm pretty much part time so although that will hurt the pocketbook I'm going to make use of my time and get back to riding, take care of my garden (I do NOT have a green thumb!), and do some work on little stuff that needs attention around the house.
at June 30, 2020