... and while I don't think we'll see "normal" as it was before I do hope that things become closer to that than the strange new world we've been living in since covid (SARS-CoV-2) came to us.

Canada had some general rules for how things were to be handled, a lot seemed to be left to individual provinces. We've been fairly fortunate here in the grand scheme of things, at least as far as how many casualties there have been. The social & economic toll has been pretty bad though.

Things are starting to open back up, which is a relief. However here in Saskatchewan some of the decisions being made are not just confusing they're also frustrating. For example you can go fishing, and with members of other households in the boat, yet equine events are a no-no.  Although the government has decided that individual private lessons can take place (which previously they were saying NO to). Still, no clinics, group lessons, or events. Which brings us to this: 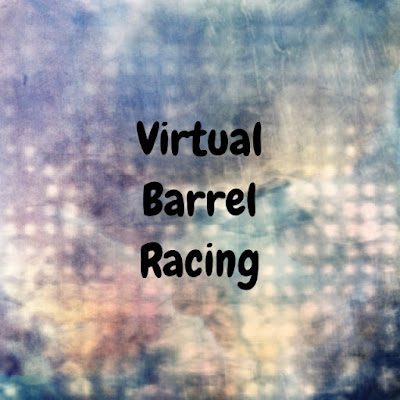 I think I can say prior to covid I never thought I'd see this, let alone compete in one. However here we are.

Lefta & I entered in one that ran this past week. Not being sure if I'd enter or not I ended up leaving it to the last day for my run, which ended up being the hottest and windiest day yet.  I set up the pattern* in my arena and had a friend pop over to stopwatch & video for me.

After it was all set up I changed into one of my MSport6 "air conditioned" shirts (like I said it was hot!), tacked up and brought Lefta to the arena. I think she thought it was the lamest jackpot eeevvveeerrr with no one else there. But heck she had her 'work clothes' on and she knew she was there to make a run. Warming her up... she was spicy. I had no idea what to expect for our run since I don't make runs at home (unless there's an actual jackpot there) but she went in hard and we kinda blew first a bit. Second was nice although we did bow out a bit to third. Third was also pretty good but again we bowed out a bit on the way home, not out of third itself though which is something we've had a bit of an issue with.

I reviewed the video and thought well heck *maybe* I'll place in the 4D lol Then I sent it in to one of the race organizers for approval before sending in my entry. So to say I was shocked that we won the 2D is an understatement ;)

With it looking like virtual events are here for the next little while, possibly the summer, I reached out to a neighbour about co-hosting one (possibly more if it goes ok) and donating part of the entry fee to a local charity. My original plans before all this had been to host a gymkhana or two this summer, again to raise money for charity.

Hope y'all are keeping well and your return to normal goes smoothly.