Provincial Finals and a quick July catch up

Holy smokes I've been b.u.s.y. lately!  Happily I've spent more days riding than not riding this past month, and about half those days I got in rides on multiple horses :)

Mr. Frosty is fairly fit, Lefta is coming along, now I need to get Voodoo legged up and miles on Odin.  We have our district's barrel racing finals at the beginning of September.  Voodoo, Lefta and Frosty are qualified, I just need to decide if I'll enter on Voodoo or not.  I probably won't have my decision made until the 22nd of August (entry day lol)

At the last Biggar valley jackpot I went to (first week of July) I took Lefta and Frosty and they placed 2nd and 3rd in the 3D.  Then this past Saturday I took Frosty to the Prairieland jackpot and he won the 3D (and there were a lot of entries!)  I'm fairly sure they'll both make 2D horses yet.

Little Miss Sarita spends her days with Uncle Applejack and gets some time in the grass pen by the barn to graze.  Lefta has been in the pen with them lately because I haven't had time to ride her enough and on pasture she balloons right up.  Seeing those two bays together, oh my what a pretty sight :) Once Sarita is grown up I'm going to have a couple really nice mares.

Our provincial finals were this past week, the 25th to 28th.  Move in day was Monday, my friend MK hauled Frosty in with her mare and her daughter's Peewee horse.  Got settled in, rode some, and of course visited!

Sidenote, I love how they've started doing things the last few years.  It makes things so much smoother and the runs go way faster.  It probably saves at least two hours, if not more, running the open.
There are two 'round pens'  at the start end of the arena and the space between them forms an alleyway.  The overhead door at that end of the arena is open and there are gates there.  The gate people bring in riders in sets of 5, after every 5 they rake and change riders.  This is nice because it gives the horses time to settle and for their (and the rider's!) eyes to adjust.
While the set of 5 is in to run the gate people call the next set up to the gate so they're ready to enter during the next rake.
If you are not at the gate when the rake is done you are called a few more times and if you're not there when the gate closes you do not get your run.  Once that gate is closed it stays closed.  I worked the gate for the first 50 on day 2 and there were a few that cut it close.  One was even riding along the fence on the other side of the pre-hold area and I called to Chas (arena director) "That's her!"  He yelled her name and said you have 10 seconds and hit his stop watch!  She hustled right over just in time.
Riders wait in either round pen.  When you make your run you go up that short alley into the arena proper, when you come back you run down that alley and either stop at the gate or circle off into either pen.
If for some reason there's not 5 in the set due to a turnout or a scratch, they stick to the program and bring in whoever is in that set and still rake at 5 on the program.  When you come in the arena director quickly confirms he's got the right people and reminds riders to stay toward the front of the rounds pens so as to leave the back wall clear for the rider finishing their run.  If someone knocks a barrel, or even touches one a smidge, he lets the next rider know the barrel is being reset/picked up and when they're ready he waves you in.

The first of two long go's was on Tuesday.  Frosty clocked close to what he did in the jackpot on Saturday (same arena) but it felt rough and sloppy and he was slinging/shaking his head a bit.  He did just get his teeth done the night before so I chalked it up to being a bit tender from that, but I know I didn't ride as well as I should have. It wasn't quite fast enough to place in the money but we were sitting pretty good to make the short go on Thursday.  Our run on Saturday had been smoother and I had rode better so I thought hard about where I was messing up and what to do differently.   It wasn't nerves though, I was just too complacent and sloppy :/  Seriously, so many people were saying "Are you nervous?"  Not just to me, I heard them saying it to other people too, it was kinda weird.  But I guess it is our "big event" so people are supposed to be nervous?  I just answered with a smile,  "No, it'll be what it'll be."

Day 2 Wednesday... when I was tacking up and warming up for long go #2 I visualized what I wanted to do and mentally made my run.
I went in with my set of 5 and waited my turn.  Day 2 runs in reverse order, so I was second out on the drag.  When the rider before me was rounding 3rd I started circling Frosty at a walk.  I was right where I wanted to be when she got back and her horse was out of the way for me to enter, right at the top of my circle.  I squeezed him into a lope and when our circle got to the back wall we made a right turn into the alley and I let him run into the arena.
I rode pretty much exactly what I had visualized: I let him go faster to 1st, I picked up my inside rein and grabbed horn with my outside hand when/where I wanted to while I said "easy" (I tend to want to rate too soon), I took up both reins and kissed as I was finishing 1st instead of a few strides later (he runs much better to 2nd - for me - with two reins), kissed to second, set him up better there, smooched coming out of 2nd and all the way to 3rd, "easy" and set up at 3rd and smooch and kick all the way home (seriously, I watched for the timers because I have a bad habit of quitting too soon).
I rode much better, my horse handled better, and our run felt smoother... and it clocked slower :(
We were out of the day money again but still sitting well to make the short go - the short go is based on your fastest time of the two days.  I wasn't feeling too badly, a lot of girls were saying the runs were slower.  And it looked like they were... until Bailee smoked a gorgeous run and fastest run of the week (til the short go) and changed all the brackets.
Honestly, yes I was a bit sad to not make the short go but I figured I was out by a lot after that run... later that night I found out I missed the short go by two. freaking. spots!!  So yeah, disappointed but you know what, let's keep things positive... I am way more comfortable with Frosty now, my horse worked well and my mental game was strong! 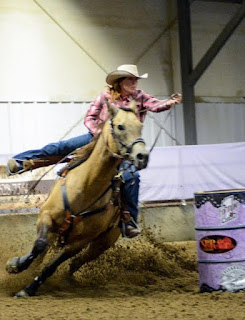 Because our cutoff for provincial finals was July 7th I've already got Frosty 1/3 of the way qualified and next year we're going for it!!  But first, we have district finals and we're going hard for that too!  ;)
at July 29, 2016