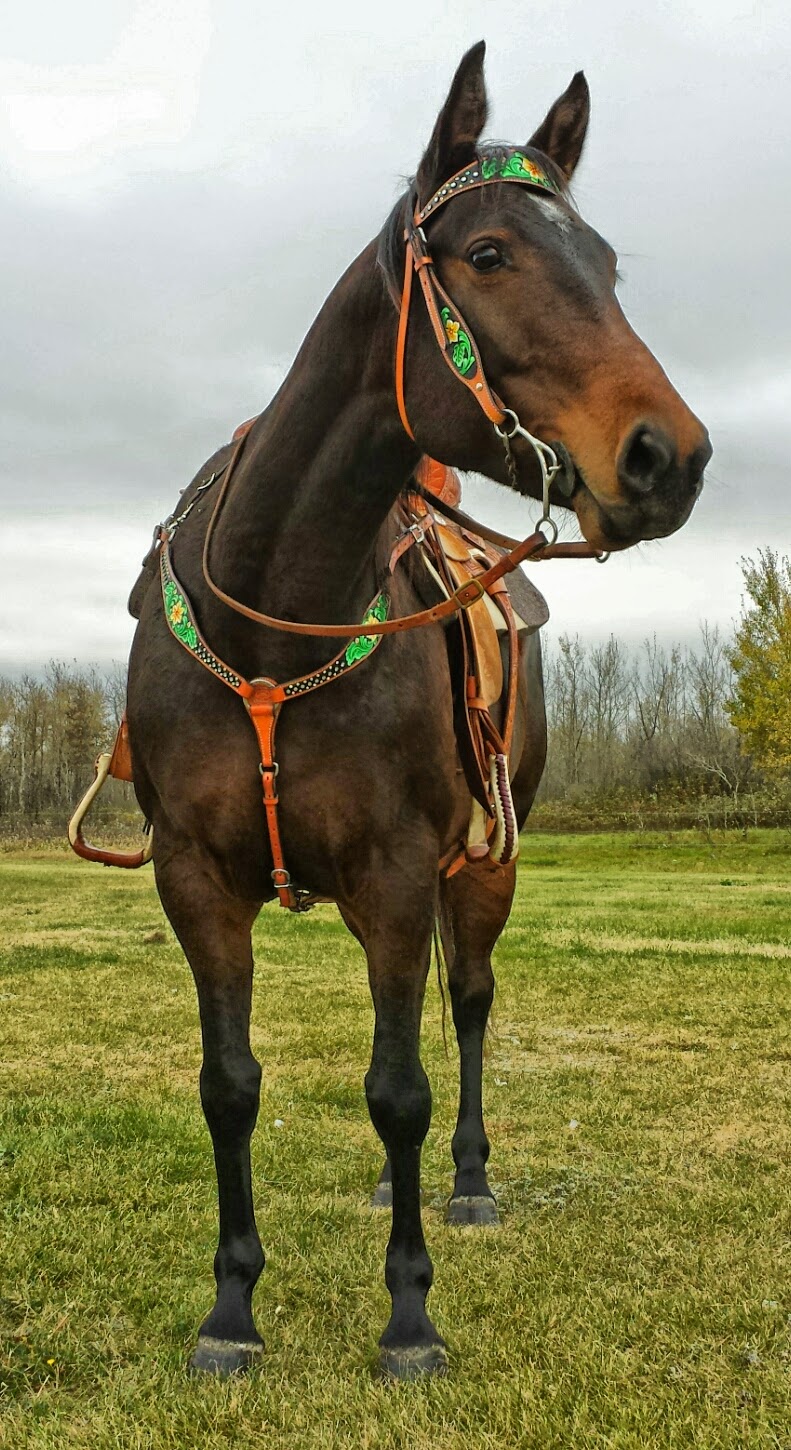 My little girl is starting to be a grown up horse!  It's amazing how much she's changed in the last couple months.
At the Ed Wright clinic this summer I told Ed that I just had NO confidence when I was on her.  It felt like I was sitting on top of something like this ^ and she just didn't feel solid or "there" under me, if that makes any sense, and I sure as heck didn't feel comfortable even loping her anymore!  Ed watched us warm up and said to only go as fast as I felt comfortable with, to not let anyone push us faster than I felt we were ready for - including him.
Lefta was a ball of nerves that first day, she was just recently working through her trailering issues so I'm sure having to go for a "car ride" didn't help.  But being so nervous and on edge most of the day just didn't seem right, she HAS been to places before and around other horses.  Then again, that has been part of the problem.  Even at home when we had jackpots she just doesn't seem to feel comfortable with everything going on.

*she's been to another clinic and spent the winter before last going to team penning, so it's not like she hasn't been in that kind of situation*

On the second day while I was warming up Ed pulled one of his "eyes in the back of his head moments" when I rode past him and said "Nice warm up, you both look better today"  :)
Seriously, how does he do that.  He is very focused on who he's working with and we warmed up BEHIND him lol
When it was our turn I told him I was ready for some faster work.  That she finally felt solid and like she was there beneath me.  It had changed from feeling like I was on top of this ^ to this ---
And we did work... and things were starting to come along except she was having an absolute FIT about going to the left.  Ed said he thought she was sore, most likely in her neck and I told him that she had been but had been checked by my equine bodyworker and was all clear, and that I thought she was anticipating it hurting.  He looked her over and agreed, then he got up on her to do some more advanced work to try to get her over it.  His comment "Wow she sure holds on to stuff doesn't she?!"
Ummm, yes.  Something goes wrong with her and you'll be investing time to fix it that's for sure! (yes, like the trailering!)

Lefta got most of the summer off, other than trail riding, seeing as I took most of the summer off from barrel racing other than going back to slow, "aim for correct & precise" stuff with Voodoo.
But ever since the clinic when I have ridden her, wow!  She's just felt solid and confident.  She even likes to lead the trail rides and doesn't seem bothered by anything (other than dogs that jump out from nowhere)
Well, well... now it is once again the little miss's turn.  We worked in the arena yesterday just to see where her mind is at seeing as she really hasn't had to do much "work" the last couple months .
Oooh boy howdy did I second guess getting on her for a moment... I put the reins over her head, tightened her cinch a couple holes and then before I could swing a leg over she was gone.  Zipping around the arena with little humpy whale bucks and just ruuuunnnning.
Once she settled down and stood, looking QUITE  proud of herself, I walked over to her and said "Well I hope you had fun, consider that your warm up!"  and then we started trotting and loping.  Lots of different exercises and drills but no actual barrels.  I just wanted to see where her mind was at and I was pretty pleased that she settled down and went right to work after her little shenanigans!  Geez, I was only wanting to see where she was at with doing work instead of trail riding lol
Today I set up the barrels and we headed back to the arena, warmed up and trotted through.  Not bad, not great... didn't like what I felt on the left though.  Loped through and yeah... left was not good.  She's acting like she's sure it will hurt so that second barrel sucks but when she gets to third she's fine.  Unfortunately that is not going to make for a nice pattern though lol
Until she gets through this "ooh noes it's going to hurt" we'll do some body work and lots of work softening and gaining flexibility to the left.  And it will probably also take lots of just riding through it so there will be lots of days she ends up like this: 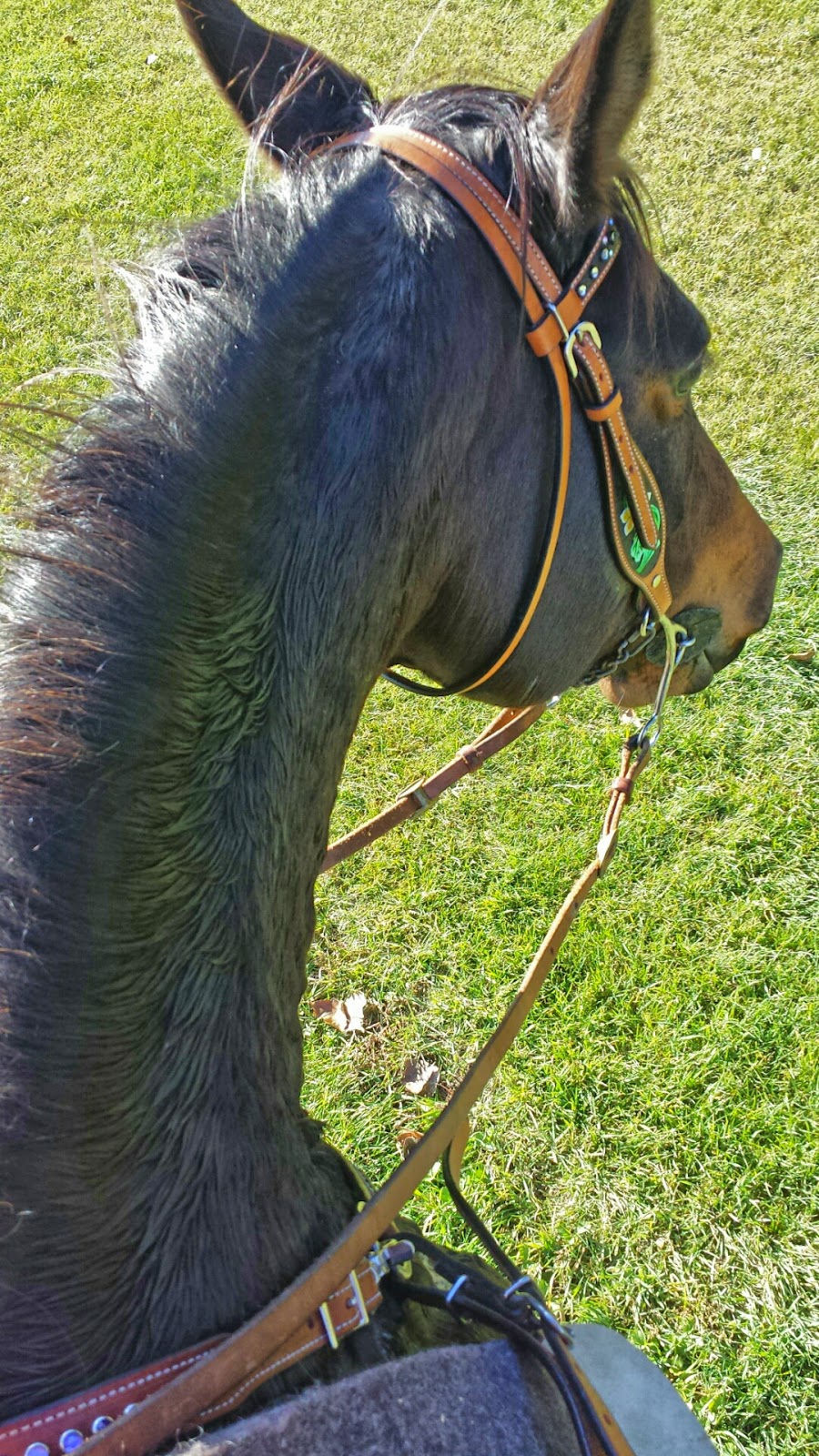