If you live in the country for any length of time it's bound to happen... livestock gets out, either yours or someone else's. Not a huge deal if it's dealt with properly and promptly. But when it's not, oohhh man!  Get ready, grab a snack, this is a bit long-winded.

There is a farmer/rancher in the area that is fairly notorious for his cattle getting out, we'll call him BN.  We've been here for 4 years now; first year no problem, second year one got into our horse pasture once and he promptly came and picked it up, last year nothing and then this year... it's gone from a minor inconvenience to a problem.  And I think that's part of his issue, he's been here "forever" and we're "new".  But I know for a fact we're not the only ones having issues with him as he rents & owns several pastures in the area and other people are having the same problems with him.

For the story below a five year old I drew you a little "map" (I apologize, my Paint skills are sorely lacking
Here is the key to the map:  Large purple shape is main horse pasture, green shape is the cow pasture.  Blue rectangle is a hay field (with a closed gate to the cow pasture).  The little grey square is the hay barn, the brown square is the pen with gates that open into the cow & horse pastures, where the horses come in for water (the cows have a waterer in their pasture).  The white space to the right of the pen and below the horse pasture is part of my small horse pasture.  Keep those fuzzy red & orange lines in mind, I'll get to them in a moment! 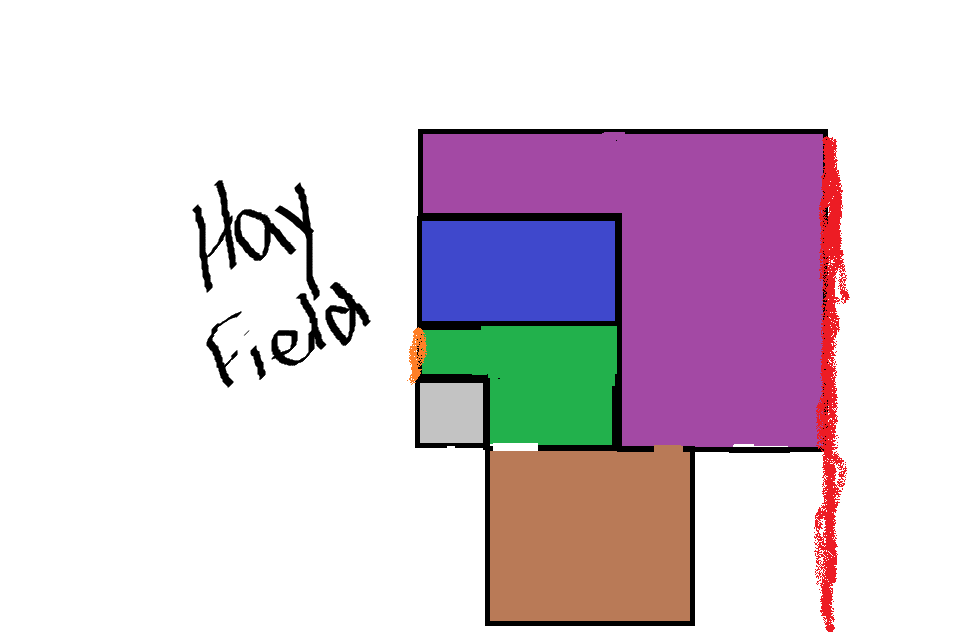 I went to do chores one night and my cows were making quite the racket.  A couple of the calves were small enough to have gotten under the hotwire so I thought maybe some mommas were upset.  I used the little flashlight on my phone and did a quick head count and everyone was there, and then I heard a snorty sound behind me... I turned and there was a strange cow in the small horse pasture!  No horses were currently in there so I didn't worry about it, I just figured one of BN's cows had gone through the fence. That fuzzy red line is the shared fenceline.
The next morning I went to check and the steer had crawled through into the horse pasture.  I got him moved into the pen and called BN... he came and got him a couple days later.

This sort of thing has happened repeatedly this spring/summer.

The last few times his cattle would get into my horse pasture and then crawl the fence right into my cow pasture.  BN took longer and longer to come and get them.  Then the worst part happened... his darn cows broke through my cow fence and took my cows with them, right into the hayfield, they broke the fence where the little, fuzzy, orange line is.
I was at my limit, not only were his cattle eating my grass (and my cow pasture isn't big, I don't have grass to spare) but we also were wanting to put our bull out soon and I have automatic waterers so it was literally costing me money to have his stock here.

The last time before this that BN's cattle had been here I had been less friendly than normal and I told him that he really needed to do something about this, maybe improve the fence.  And yes, this was HIS responsibility in my eyes seeing as MY animals were respecting that shared fenceline and staying where they belonged.  He kept giving lame excuses as to why they were getting out... and it wasn't just into my pasture, at night you drive slower down my road and the surrounding ones knowing that there's a good chance some of BN's cattle are out in the ditch/on the road.

So anyway, this last time when all the cattle were out (except our bull, poor Baxter was bellerin' up a storm from his pen though!) the Hubster and I were on our own to round everyone up.  Hubster took the quad, I grabbed Voodoo and we got it done -- pretty proud of us and VERY proud of Voodoo, man oh man did he work those cows!  (really wish he could work like that at penning and sorting but I guess he knows when it really counts and when it's a "game")
After the deviants were penned I called BN, got his voice mail and left a message stating that his cattle had gotten out, wrecked our fence and took our cows & calves with them.  He needed to pick them up NOW and he better bring fencing tools.  Whattaya know, who pulls into the yard with a little black truck (no trailer) about 15 minutes later to 'make sure they were his cows'.  Really?!  I had left a message over a week ago that they were here, and the day before I had called again leaving a message telling him he had until sundown the next day to collect his cattle.

(dangit, they got out the next morning!)
Well he couldn't deny they were his, especially with those brands haha!  He was back about 20 minutes later and got them loaded then I walked him to the pasture and showed him the broken electric wire and smooth wire.  BN and his brother fixed the fence and after they left Hubster and I put our mommas & calves out.  Hubster went to work and I went riding with friends.
We got back and who was in the hayfield... my girls and their babies.  I was soo mad but also grateful my friends were with me, we got them rounded up and in a pen.  Poor Lefta, she's not a big fan of cows and she had to work them, and not in the confines of an arena but out in the wide open where she had to w.o.r.k. lol
I checked the fence, it was all up but for some reason there was no *zap* to it.  Hmmm
On his day off Hubster and his buddy went to put up another wire and check the ground and that's when they found it... that jerk BN and his brother had wrapped the electric wire around fence posts instead of tightening it properly, it was grounding out!  I was so mad I could spit!
Funny, once the guys fixed the fence PROPERLY it's worked fine and the girls, babies and Baxter are all contentedly munching away on the grass and staying put **knock wood**
I really need to look into what my rights are in this situation should it happen again, because I'm not really wanting to keep them in my pens or pastures any longer.
You may have noticed I've been referring to Hubster in this post.  Pie & I are still together, I've just renamed him ;) 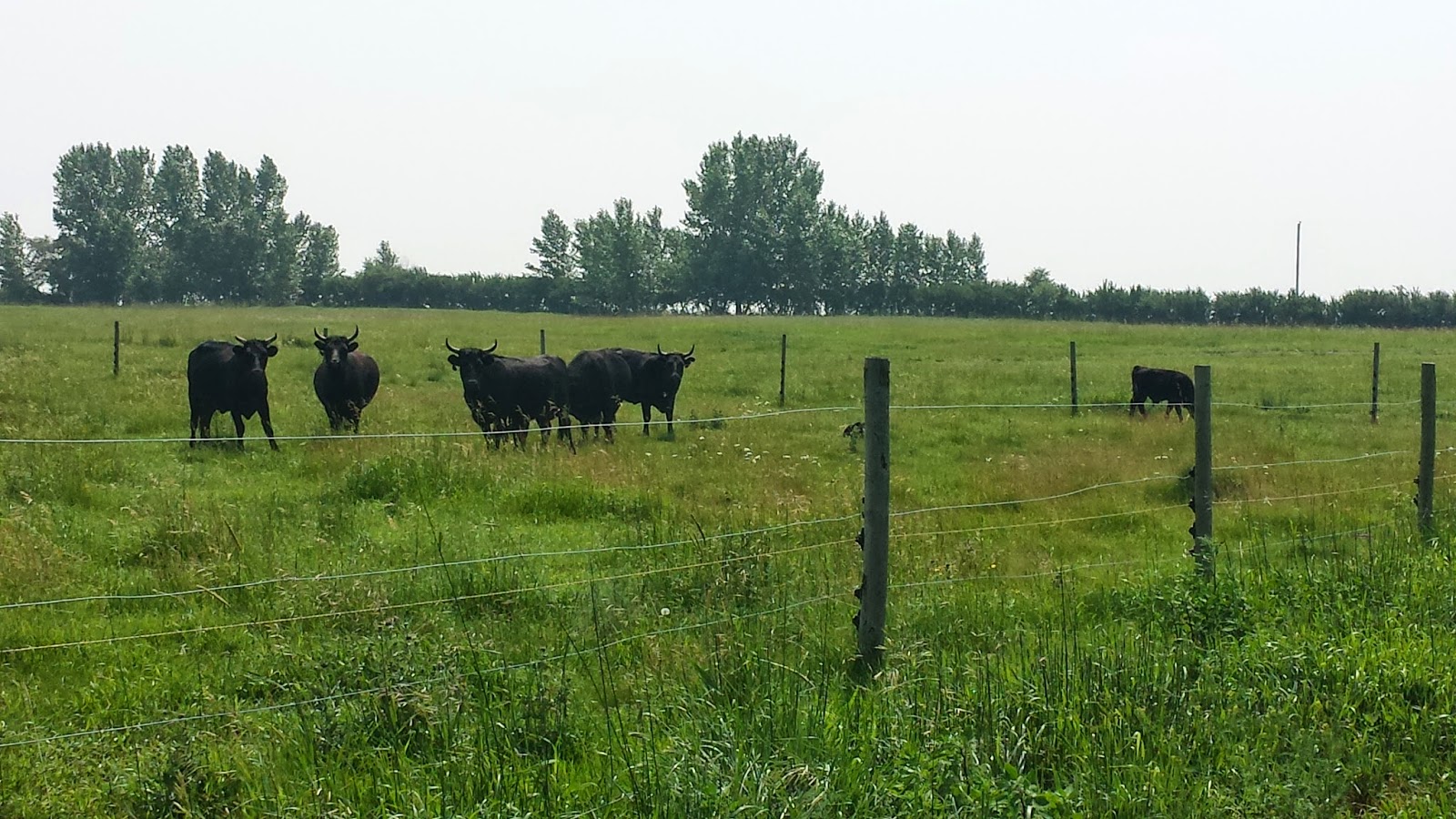 Good cows!!
**edit to add, those trees in the background?
The shared fenceline is right behind them, they're further away than they look**
at July 09, 2014