Some of you may have thought I forgot to post the winner for my giveaway, but nope... like usual things have just been a bit busy for me to get to it. Today however I had some free time and gorgeous weather (the too hot to ride right now kind) as well as two handy assistants so I got to it.
Comet (assistant 1) was kind enough to bring me a hat for a "draw bucket" 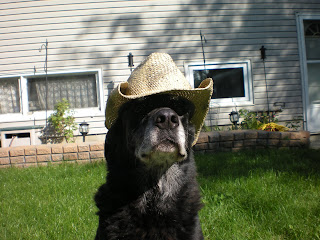 Then I wrote everyone's name on a piece of paper... which was then torn into individual ballots and placed in the hat. 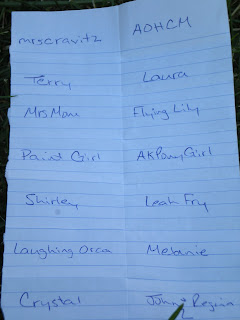 Misty (assistant number 2) supervised all of this to make sure there was no funny business. She watched both Comet and I very intently, afterwards she gave her approval that everything was on the up and up (although she also stole Comet's frisbee later on... hmmm) 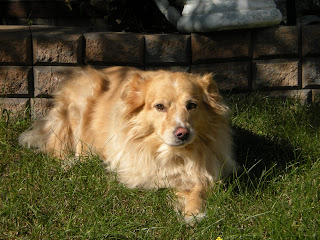 I shook up the hat after the ballots were placed inside and then handed it over to Comet. Originally I was going to ask him to pick a paper out but I reconsidered... he was a bit slobbery in the heat today.
Instead I gave him the hat to carry around. I asked him to drop it hoping a name would fall out.
Nope. 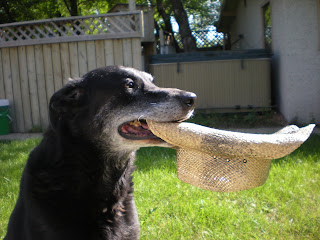 Ok so we try again. But yet again he carefully placed the hat down.
Geez Comet, its not my good hat you can toss it around a bit!! lol
One more try. This time I put a bit more forcefulness into my voice when I said "drop it!" and he did! Even better a name popped out!!
So here is our winner: 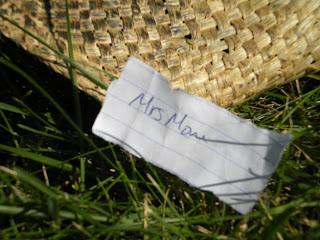 In case you can't make it out it says Mrs Mom.

Now the title of this post is "Winners" so I should mention another winner. Well, not exactly a winner... a second-placer. Voodoo & I got 2nd in the 3d at the jackpot on Saturday!
While still not really running hard we managed to get our best time in this arena and scooped up the 2nd place. He and Applejack are running pretty tight against each other but I had given Applejack the day off and took just Voodoo.
This weekend is the real test - our district finals, and I've entered both horses.
at August 31, 2009