The last 2 weeks or so are kinda a blur. I'm having trouble remembering what happened and on what day. The basic routine is to get up in the morning (much earlier than I normally do), go to the hospital and visit Pie for awhile. Then I'm off to try to squeeze in some horse time (not enough though), run errands (ewww, had to get mouse traps) or do some housework and/or laundry. Let the dogs out, feed the dogs, grab a shower and lunch for myself. Then off to visit at the hospital again, work, home to sleep a few hours. Next day repeat.
I have managed to accomplish one thing though, I got VooDoo qualified for our district finals! Of course it greatly helped that if you are going to run more than one horse you only need four jackpots on each instead of the eight you need for one horse. But still, I've only had him for just over two weeks and he's qualified! That relieves a bit of pressure.
I also rode him off the yard for the first time yesterday. Well technically he's been off the yard, but always at an arena, this was out in the open. Kimfer and I snuck in a ride out in the ditch while the farrier was working on the other horses. VooDoo was so good that I even loped him for a stretch. Normally I'd wait a couple rides before asking a new horse for any speed but nothing seemed to phase him.
I've been trying to get a decent pic of my three horses but so far this is the best one: 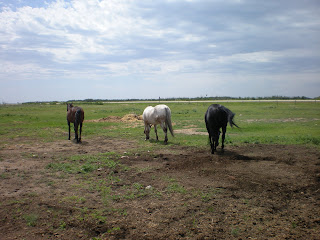 On Wednesday we had a Canada Day jackpot/fundraiser. Both horses ran consistent but didn't place. Applejack & I are sorting out our issues with second though, it was much better especially on our second run. VooDoo, well I think we need to do some slow work. He knows the pattern we just need to refine our communication.
There was the option to dress up with small prizes as incentive. I do believe that CS won. She used to be a trick rider, I think she last wore this outfit then: 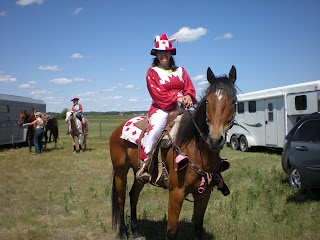 Pie is doing much better. It turns out he had a large and a small abscess in his lungs. Thanks so much for all your prayers. We're hoping he'll be out of the hospital by mid-week.