Life is funny.  Any of you fellow bloggers know that some of your blog/Facebook friends become *real* friends, whether you ever meet face to face or not.  Some you hope to meet and make plans for it to happen, some you would like to meet but figure it's not going to happen for one reason or another, and some you're okay remaining "computer friends" with.
Well a couple weeks ago I met a fellow blogger that I've been friends with for eight years now, one that I figured it wouldn't be likely that I'd ever meet even though I wanted to. (I just don't get to travel much!)
Anyway it all started over, what else, horses.  She had a horse that didn't fit in her program and she didn't want to just sell him on the open market.  One night we were chatting and she offered him to me, and I'll admit I thought it was a joke at first.  We chatted about it off and on over the late winter/early spring and the I realized, I had a trade for her!  Tavi and I just didn't get along, and he's a nice enough horse that someone experienced could bring out his potential better than I would be able to, not to mention the whole butting heads made him the last horse I wanted to ride.
We fleshed out a plan, originally we were going to meet but then she said it's not that much further just to come all the way to Saskatoon.  Well okay then, the best part was we'd get an actual visit in not just a quick meet and trade!
So two weeks ago she rolled into my yard late one night.  I met her down at the barn and as she climbed out of her truck she said "I'd hug you but I'm smelly from traveling" (or something along those lines) and I said "Hey I just did chores!", and that's how BEC and I met face to face for the first time! lol
We got Frosty unloaded and settled then went up the the house where Hubster had a very late supper waiting for us.  The three of us ended up talking til 2AM then we chatted all the way into the city while we got BEC to her hotel.
The next morning we rode and visited.  Marge (my equine body worker) came over and talked to BEC about some maintenance stuff for Frosty and then they both rode him, that's right Marge got on before I did! lol
Later on BEC and I rode some more, she tried Tavi and I rode Lefta.  (thanks for the tips BEC!) and of course we visited a ton.  Then early that evening we realized we had no pics!  So I got Hubster to take a pic of the four of us :) 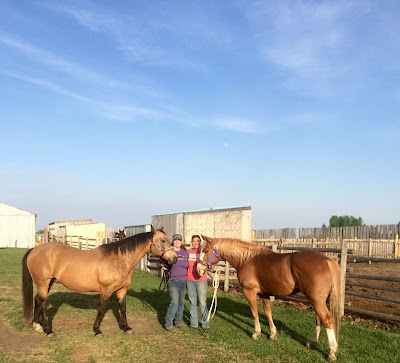 Hubster, BEC & I went out for supper that night and visited pretty late again.  Then the next morning there was a short visit before BEC and Tavi loaded up to head back stateside.  It was a short visit, and it sure flew by, but it was awesome to meet in person and have it go so well!  Especially when we had both joked we felt a bit of "first date" jitters lol
at June 02, 2016